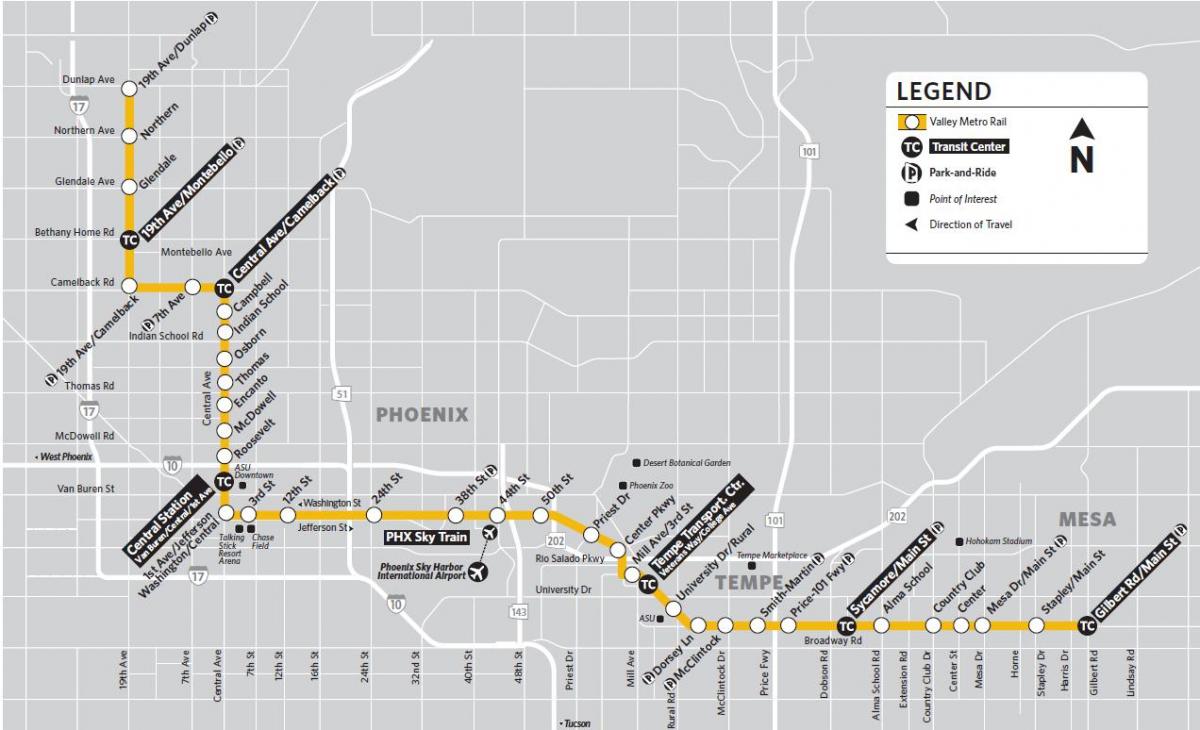 Most major hotels in downtown Phoenix are within walking distance of the light rail. You can take the PHX Sky Train from the airport to the 44th Street/Washington Street station and transfer to light rail as you can see in Phoenix rail map. Many attractions, including the Heard Museum, Phoenix Art Museum, and the Arizona Science Center, are along the light rail route. To see other Valley attractions, transfer to a bus or use a rideshare service. Because parking in downtown Phoenix can be a challenge for sporting events, concerts, and First Fridays, consider parking at one of the park-and-ride lots and taking the light rail downtown. Light rail also stops at Mill Avenue and Third Street in Tempe, one block south of Tempe Beach Park, where many major festivals occur, and in front of Sun Devil Stadium, where Arizona State University plays Pac-10 football.

In August 2015, the city of Phoenix approved the 35-year city wide transportation plan, which proposes expanding the existing light-rail transit (LRT) system by 67.6 km (42 miles) to reach 106.21 km (66 miles) as its shown in Phoenix rail map. The LRT system began operations in December 2008 and serves three cities – Phoenix, Tempe and Mesa – in the Phoenix metropolitan area. The current line covers 35 stations, of which 21 are in Phoenix, nine are in Tempe and five are in Mesa. There are 11 park-and-ride locations, which offer 4,488 parking spaces. Valley Metro Rail operates 365 days a year, 20+ hours a day, with a 12-minute peak hour frequency.

The system comprises one line, which spans 41.84 km (26 miles) from Dunlap/19th Avenue to 44th Street/Washington in Phoenix, further to Price-101 Freeway/Apache Boulevard in Tempe and finally to Mesa Drive/Main Street in Mesa as its mentioned in Phoenix rail map. The end-to-end journey time is 85 minutes. The most recent addition to the network was the Phoenix Northwest LRT Extension Phase I, which was opened in March 2016. The extension spans 5.14 km (3.19 miles) from Montebello to Dunlap Avenue, covering three stations (at Dunlap, Northern and Glendale). The joint venture (JV) of Sundt and Stacy & Witbeck were the construction contractors and AECOM was the design contractor. Prior to this, service commenced on the 5-km (3.1-mile) Central Mesa light-rail extension that connects Sycamore Main Street and Mesa Drive and covers three intermediate stations.