You can find on this page the Phoenix streets map to print and to download in PDF. The Phoenix roads map presents the road network, main roads, routes and motorways of Phoenix in Arizona - USA.
By 1950, over 100,000 people lived within the city and thousands more in surrounding communities. There were 148 miles (238 km) of paved streets and 163 miles (262 km) of unpaved streets (see Phoenix streets map). 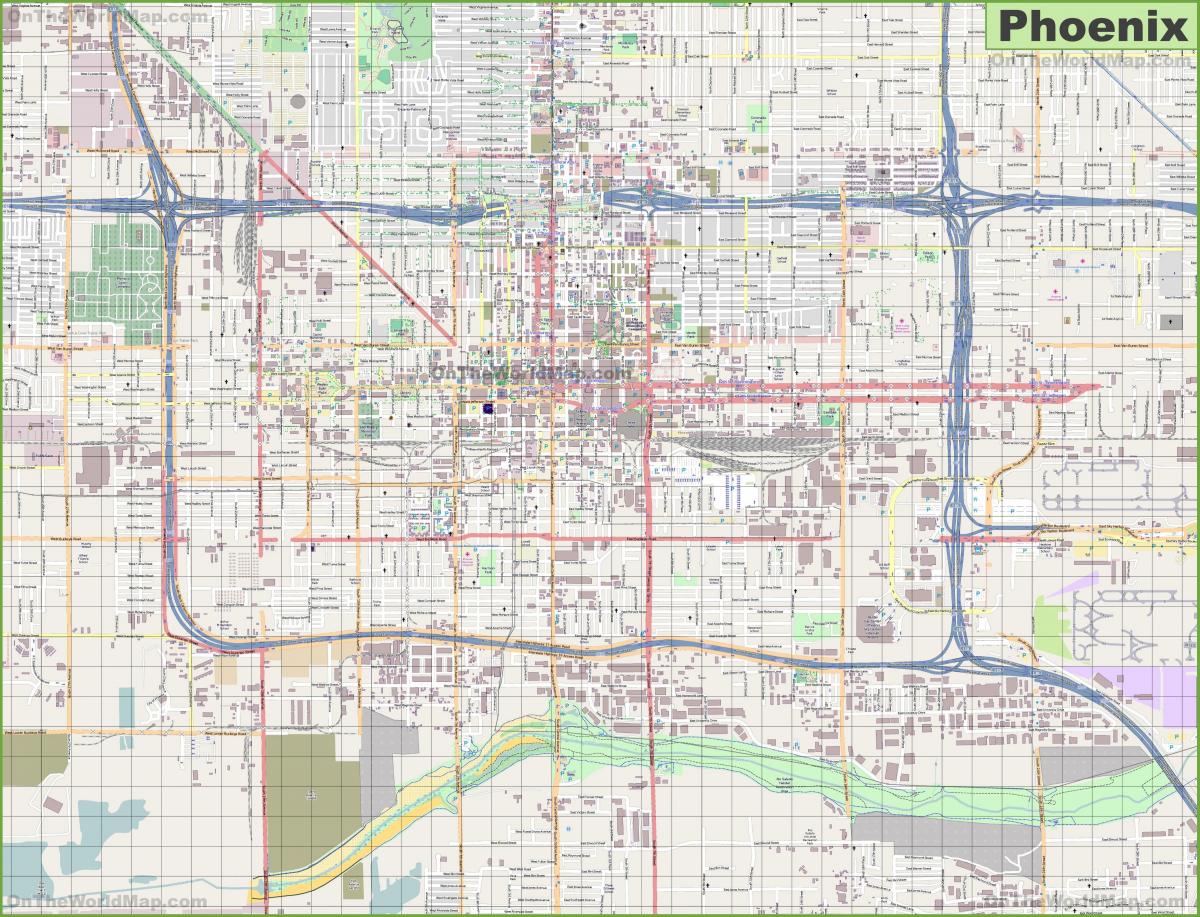 The street system in Phoenix is laid out in a traditional grid system, with most roads oriented either north-south or east-west. The zero point is the intersection of Central Avenue and Washington Street. Numbered Avenues run north–south west of Central; numbered Streets run north–south east of Central. Major arterial streets are spaced one mile (1.6 km) apart. The one-mile (1.6 km) blocks are divided into approximately 1000 house numbers north and south, and 800 house numbers east and west, although this varies. Scottsdale Road, being 7200 East, is approximately 7200 / 800 = 9 miles (14 km) east of Central as its shown in Phoenix streets map. The Valley Metro bus numbers are also based on this numbering system, with the Central Avenue bus being Route Zero, and Scottsdale Road being Route 72.

Street gangs and the drug trade had turned into public safety issues by the 1980s. Van Buren Street, east of downtown, became associated with prostitution. The city crime rates in many categories have improved since that time but still exceed state and national averages.Many street names are familiar to anyone who has taken U.S. history: Washington, Jefferson, Van Buren, Adams, Roosevelt as you can see in Phoenix streets map. And many of them are obvious if you have a sense of direction: Northern, Southern, Central. Scottsdale, like every city, has a lot of names. The history behind the names can illustrate the history of the city. While many of the names refer to natural or man-made geographical features, others refer to early pioneers, early snowbirds and other prominent individuals. Some are chosen just because they sound nice, or because they fit a theme.

The early layout of Phoenix was a simple grid, destined to prove that nothing is quite as simple as it seems. The major streets running east-west were named for the U.S. Presidents, with Washington in the middle. Subsequent presidents gave their names to alternating streets first to the north, then the south in order of office. Adams became the first street to the north of Washington, Jefferson the first south, and so on. Indian names were used, more or less, for north-south streets: Cocopah, Yuma, Papago, Mojave, Cortez, Montezuma, Maricopa, Pinal, Arivipai, Tonto, Apache. Not all numbered avenues got their names at the same time. 27 north-south streets across the valley were "laterals" that ran a long a series of farming canals one mile apart as its mentioned in Phoenix streets map. Until the 1940 when the county gave 27th Avenue its present name, it was called Lateral 14. 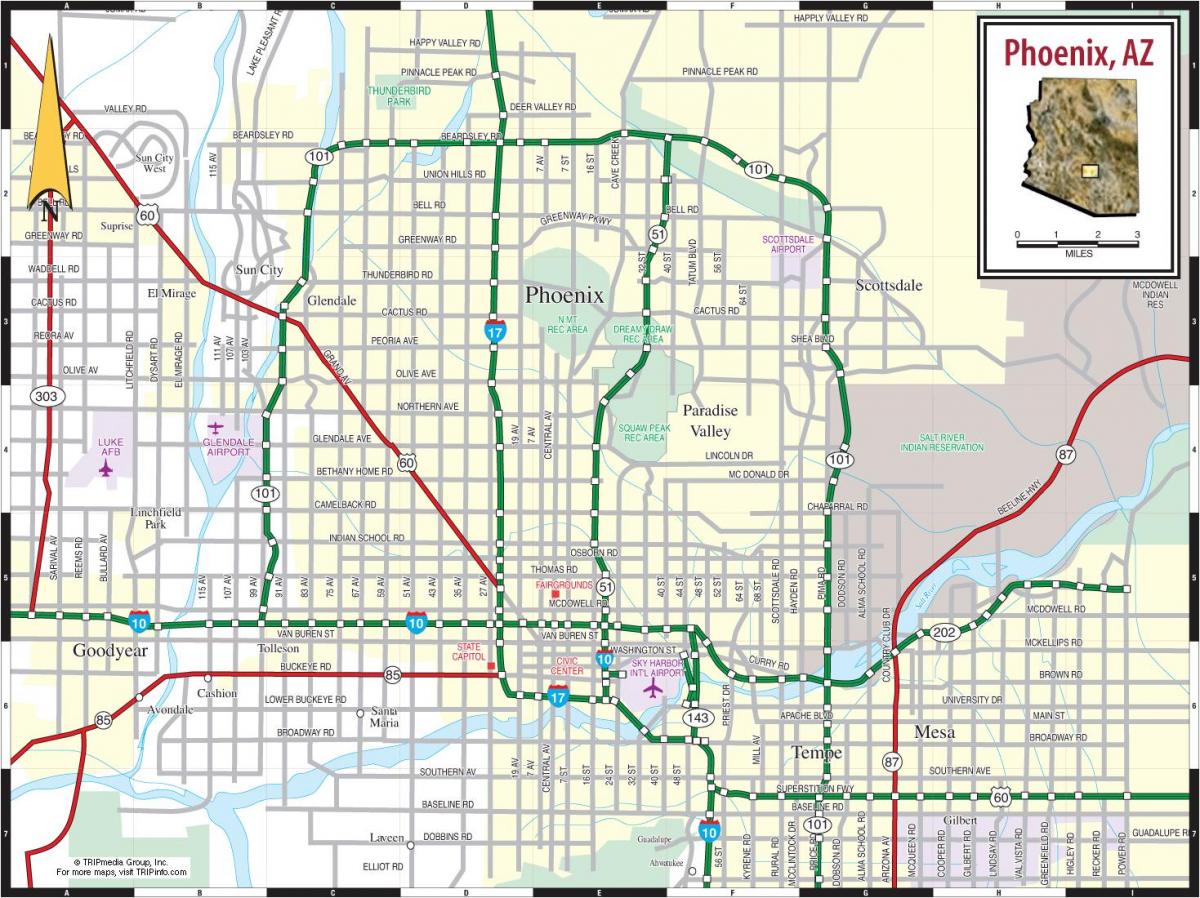 Phoenix is the sixth largest city in the United States, an oasis in the middle of the Sonora Desert at the foot of the Superstition Mountains and the Mogollon Rim. Laid out in a grid pattern along the USGS land survey system, Phoenix is a relatively low-density, spread-out city. The freeway system is concentrated near downtown, with several state route freeways and the two Interstate highways clustering near the airport. Loop 101, completed in 2004, provides a partial belt route. Freeways in Phoenix were developed rather late compared to most US cities. The first freeway was the Black Canyon Freeway (now Interstate 17), followed by Interstate 10 east of Interstate 17 as you can see in Phoenix roads map. These first two freeways were completed by 1970, and no new freeways opened for 9 years.

Phoenix is served by a growing network of freeways, many of which were initiated by a ½ cent general sales tax measure approved by voters in 1985. Before this network, Interstate 10 and Interstate 17 handled almost all freeway traffic in Phoenix, placing a large burden on surface arterial streets, leading to increased traffic congestion as the area grew in size. The current freeway system comprises two interstate routes (I-10 and I-17), the nearly transcontinental US 60, and several state highways as well — including SR 51, SR 85, Loop 101, SR 143, and Loop 202 as its shown in Phoenix roads map. Eventually, several other state highways (Loop 303, SR 801, and SR 802) will make their way into the system as they are needed.

Interstate 8 passes the metropolitan area to the south, connecting Phoenix with Yuma, the Imperial Valley, and San Diego. The best route to westbound Interstate 8 from Phoenix is either via Arizona 85 at Buckeye or via Arizona 347 in the Gila River Indian Reservation. Interstate 10 as its mentioned in Phoenix roads mapis the primary east-west freeway route through the city of Phoenix. Coming into the metropolitan area as the Maricopa Freeway, Interstate 10 turns north as it passes by Loop 202 (San Tan Freeway) and the community of Ahwatukee just east of South Mountain. Interstate 10 is ten lanes as it meets U.S. 60, the Superstition Freeway. Interstate 17 is the Black Canyon Freeway, originating in downtown Phoenix and continuing north toward Sedona and Flagstaff. This major route replaced former Arizona 69, which was replaced by Interstate 17 in the 1960s and 1970s in the metropolitan area.