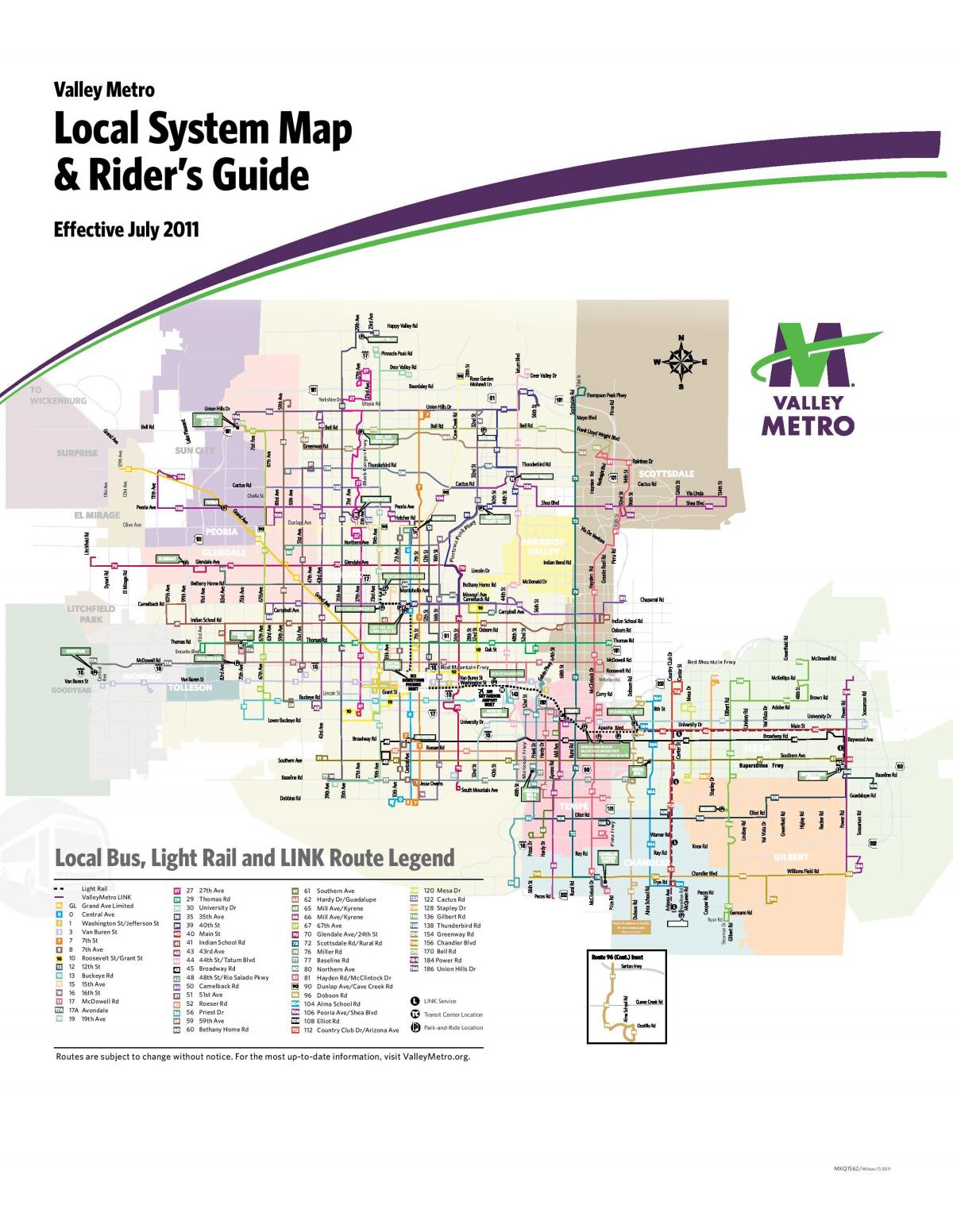 Valley Metro operates bus routes around the Phoenix area through private companies in Phoenix, Mesa, Tempe, Glendale, and other parts of Maricopa County as its mentioned in Phoenix bus map. These include fixed routes on city streets, suburban Express buses, RAPID buses, and circulators in downtown parts of Phoenix, Glendale, Tempe, and Scottsdale. This regional transit system covers 513 square miles. If you stay in downtown Phoenix or on main roads in Tempe and Scottsdale, it can be a budget-friendly way, along with the light rail and rideshare options, to explore the Valley without renting a car. In addition to Valley Metro's bus and rail services, there is the Downtown Area Shuttle (DASH). This is a free shuttle bus system that serves Copper Square and other parts of downtown. Routes and schedules vary somewhat with days and events, but expect to have regular service to most spots in the area from 6:30 am to 11:00 pm, Monday through Friday. The DASH does not operate on weekends.

Rates are the same for the local buses as they are for light rail ($2 per ride or $4 for an all-day pass). Express and RAPID buses are $3.25 per ride or $6.50 for an all-day pass as its shown in Phoenix bus map. Rural routes are $2 one way (same city) or $4 one way (multi-cities). Most neighborhood circulars are free except for the Avondale ZOOM, which is 50 cents per ride. The same discounts for light rail apply to the bus system. Most local bus routes run from 5 a.m. until midnight. You can find timetables for all buses (plus the light rail) here. Click on the transportation mode you plan to take (local bus), click on the route, and click on the stop to see scheduled arrival times. The Valley Metro trip planner can help you determine which bus you need to take to your destination.

Valley Metro bus routes cover a very large service area, running on many major roads. Most routes run every day, every 30 minutes or better. On weekends they may have reduced service or lower frequencies of up to 60 minutes. Other details are provided in the Valley Metro Transit Book, available at many locations. Bus route 13 and the Metro Rail serve the airport. Valley Metro fares are very affordable for visitors. A single ride on a bus or light rail is $2 for adults. The more affordable option is a day pass, which costs only $6 if purchased on-board a bus, or $4 if bought at a vending machine, located at all light rail stations, as well as at sales retailers as you can see in Phoenix bus map. 7-Day passes for $20 are also available at machines and retailers. 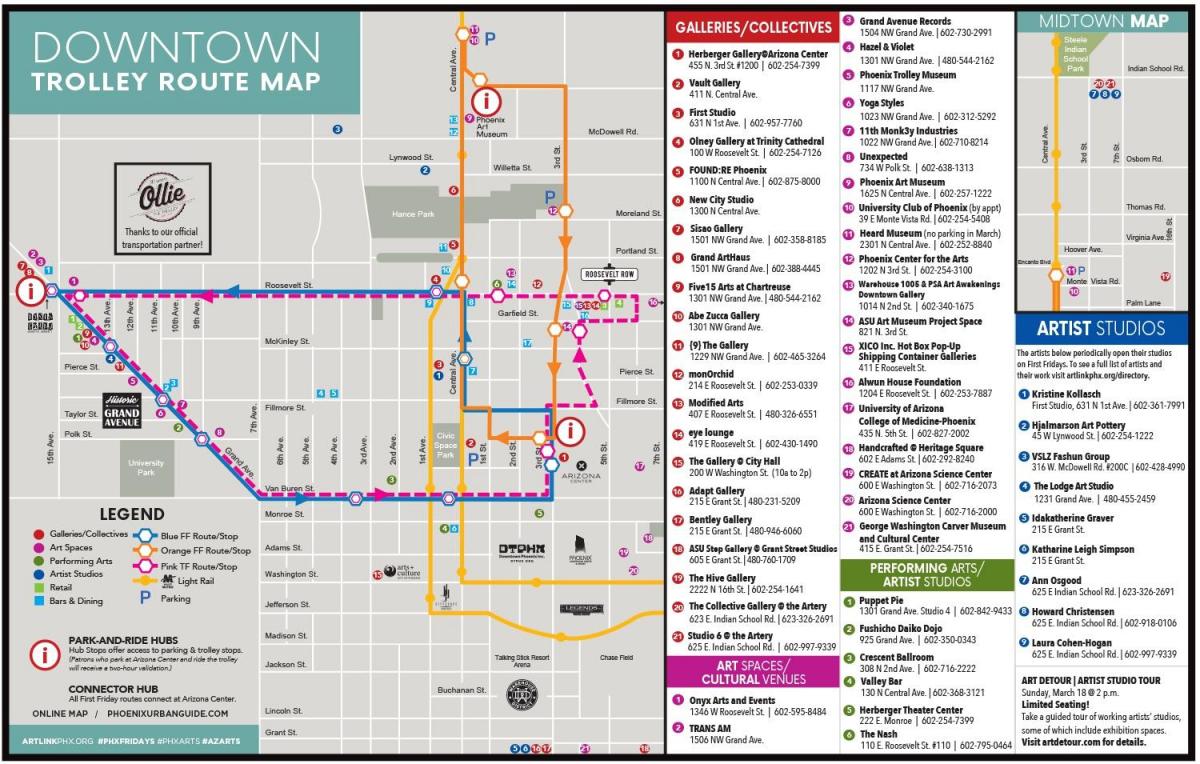 A trolley system hit the streets of Phoenix in 1887 powered by teams of mules. In 1893, trolleys switched to electric power. The cars glided over steel tracks placed in dirt. In 1928, the city of Phoenix purchased more modern trolleys for nearly $14,000, equal to $208,000 today. By 1929, the new trolley cars began rumbling down Phoenix streets at about 15 miles-an-hour. According to Fleming, the demise of the streetcar was due to a suspicious car barn fire on October 4, 1947, that destroyed all but six trolleys as its mentioned in Phoenix trolley map. Fleming said the cause of the fire remains a mystery. By the late 1940s, Phoenix riders turned to buses to get around. Over time, the Phoenix trolley system became a distant memory.

In Phoenix, there was the Phoenix Street Railway System, which operated from 1887 to 1948. It was owned and operated by the great promoter and subdivision mogul, Moses H. Sherman, until 1925, when the city of Phoenix took over operations. The first streetcar line as its shown in Phoenix trolley map, consisting of one car, operated along Washington Street between Seventh Avenue and Seventh Street in 1887. The car was pulled by a mule and there was little effort at maintaining a standard schedule. A second line was introduced in 1889, running along Center Street (now Central Avenue), and additional cars and mules were purchased. By 1892, the system consisted of five cars, eight miles of track and 25 mules and horses. In 1893, electricity started to replace the mules.

Auto-centric Phoenicians are often unaware of the city former trolley system. Lawyer Fred Rosenfeld grew up in a house at Holly Street and Fifth Avenue as you can see in Phoenix trolley map. He still remembers the sound of the trolley brake when the car would stop at the corner outside his bedroom window. Tempe is building a trolley (something happening around the country), and lines should be built in downtown Phoenix, although the leadership and funds are lacking. The Phoenix Trolley Museum preserves some of this history.