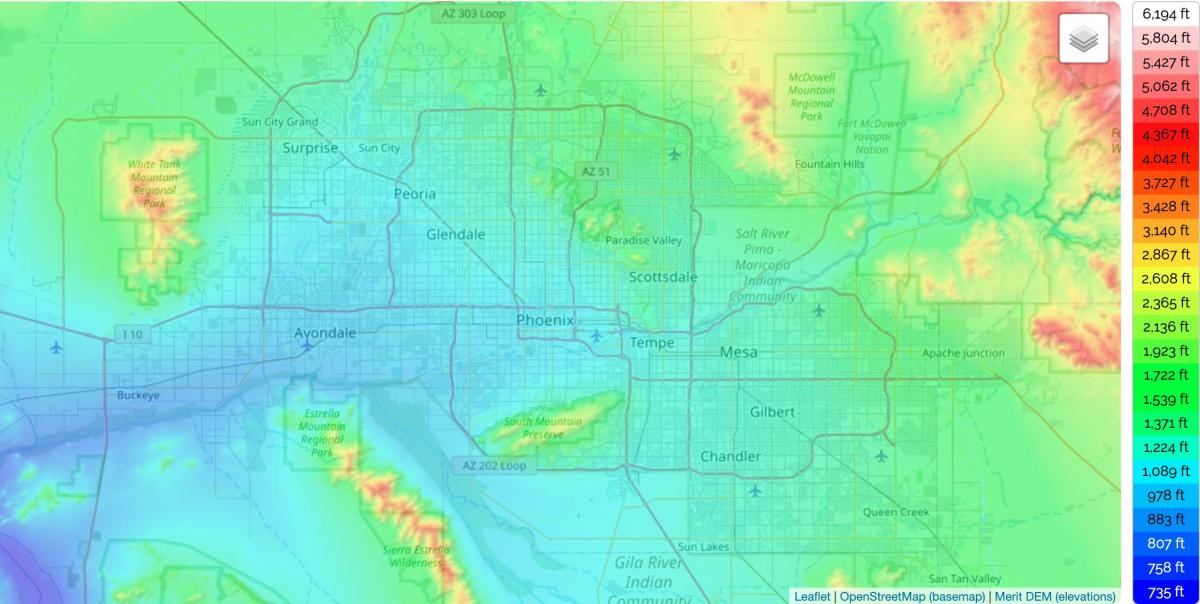 The elevation of a city tells us how high it is when compared to sea level. Phoenix is nicknamed the Valley of the Sun due to its valley location and is therefore quite a flat region, apart from the surrounding mountains, meaning that it shares the same elevation as many other cities in the Greater Phoenix area and beyond. The elevation of Phoenix, AZ is 1,086 feet (331 m) as you can see in Phoenix elevation map. Phoenix is ​​in the southwestern United States, in the south-central portion of Arizona; about halfway between Tucson to the southeast and Flagstaff to the north. By car, the city is approximately 150 miles (240 kilometers) north of the US-Mexico border at Sonoyta and 180 mi (290 km) north of the border at Nogales.

Due to its many mountains, the state of Arizona actually has one of the highest average elevations of the entire US, with an average of 4,100 feet (1250 m) as its shown in Phoenix elevation map. Therefore, when we compare the elevation of Phoenix, AZ with the mean elevation in the rest of the state, it is easy to see that the state capital is actually one of its lowest points and is lower than other major Arizona cities like Tucson, which has an elevation of 2388 feet (728 m) or even Phoenix neighboring city of Mesa, which has a mean elevation of 1243 feet (379 m).

The highest point in all of Arizona is Humphreys Peak, which reaches a height of 12,633 feet (3,851 m) in total and is located in the Kachina Peaks Wilderness part of the state, not far from the city of Flagstaff. The highest elevation point in the city of Phoenix, AZ, is Camelback Mountain, which is one of the most recognizable natural landmarks in the entire Phoenix area and measures up at 2,706 feet (825 m) at its highest point. Other high points in Phoenix, AZ include Piestewa Peak which reaches a height of 2,608 feet (795 m) and Mummy Mountain which has a peak 2260 feet (689 m) above sea level as you can see in Phoenix elevation map.