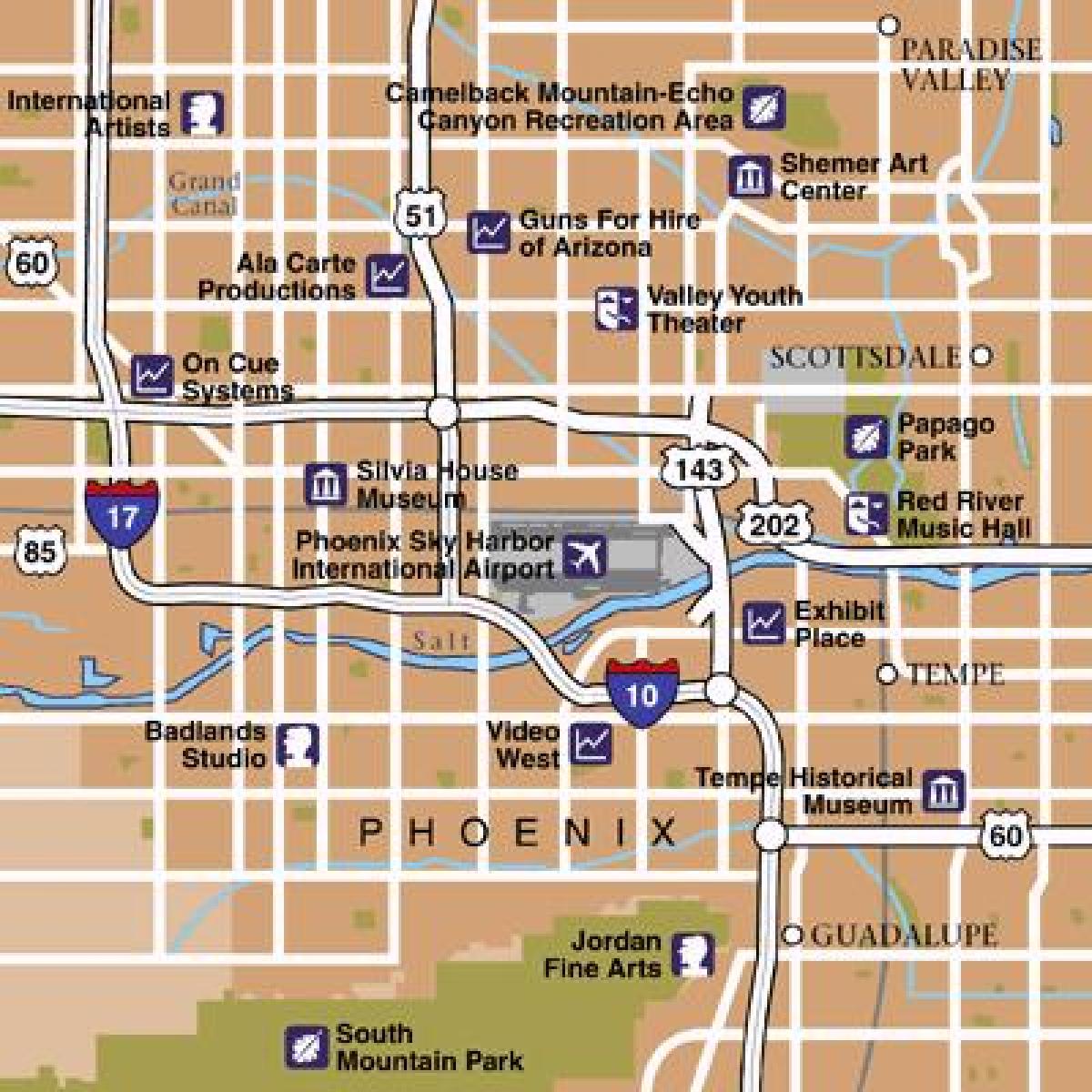 Phoenix is served by Sky Harbor International Airport (IATA: PHX, ICAO: KPHX), which is centrally located in the metro area near several major freeway interchanges east of downtown Phoenix as you can see in Phoenix airports map. Sky Harbor is the ninth-busiest airport in the U.S. and 17th in the world for passenger traffic, handling more than 42 million travelers in 2007. The airport serves more than 100 cities with non-stop flights. Aeromexico, Air Canada, British Airways, and WestJet are among several international carriers as well as American carrier US Airways (which maintains a hub at the airport) providing flights to destinations such as Canada, Costa Rica, and Mexico.

The Phoenix-Mesa Gateway Airport (IATA: AZA, ICAO: KIWA) in neighboring Mesa also serves the area commercial air traffic. It was converted from Williams Air Force Base, which closed in 1993. The airport has recently received substantial commercial service with Allegiant Air opening a focus city operation at the airport with non-stop service to over a dozen destinations. Located about 30 miles southeast of Phoenix Sky Harbor, Gateway Airport offers commercial flights to more than 45 destinations as its mentioned in Phoenix airports map. Phoenix-Mesa Gateway Airport is a farther airport to the city centre compared to PHX and it is relatively more expensive in terms of flight fares, public transport fares, hotel accommodation deals and car rental services.

Smaller airports that primarily handle private and corporate jets include Phoenix Deer Valley Airport (IATA: DVT, ICAO: KDVT), located in the Deer Valley district of northwest Phoenix as you can see in Phoenix airports map, as well as municipal airports including Glendale Municipal Airport and Phoenix Goodyear Airport. Phoenix Deer Valley Airport and Phoenix Goodyear Airport are general-aviation reliever airports for Phoenix Sky Harbor. Deer Valley is one of the busiest general aviation airports in the United States. Goodyear airport has a new terminal and one of the best general aviation runways in the country. The city of Phoenix is proud to be one of five member governments in the Airport Authority that operates Phoenix-Mesa Gateway (formerly Williams Gateway). Located about 30 miles southeast of Phoenix Sky Harbor, Phoenix-Mesa Gateway Airport offers commercial flights around the United States. 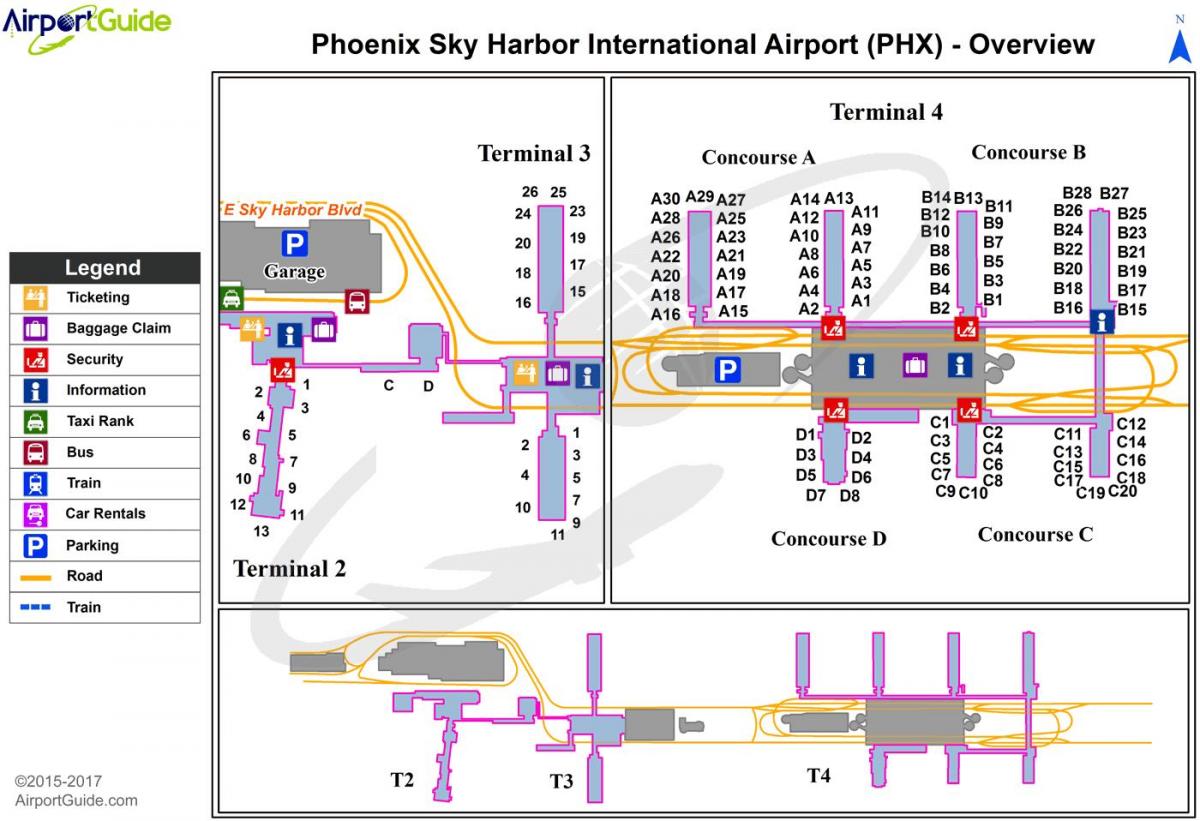 Phoenix Sky Harbor International Airport (IATA: PHX, ICAO: KPHX, FAA LID: PHX) is a joint civil-military public airport located 3 miles (4.8 km) southeast of the central business district of the city of Phoenix, in Maricopa County, Arizona, United States as its mentioned in Phoenix international airport map. It is Arizona largest and busiest airport, and the largest commercial airport in the American Southwest. In 2011, the airport served 40,591,948 passengers, making it the ninth busiest in the United States in terms of passengers and one of the top 15 busiest airports in the world with a 90 million dollar daily economic impact. On a daily basis the airport handles about 1,266 aircraft that arrive and depart, along with 111,210 passengers daily, and more than 828 tons of cargo handled. Federal Aviation Administration (FAA) records show the airport had 19,225,050 commercial passenger boardings (enplanements) in calendar year 2010 and 20,213,897 enplanements in 2011.

The Phoenix international airport has over 120 aircraft gates in three Terminals (2, 3, 4). The airport administration states that the designation Terminal 1 has been "retired", and that it did not wish to renumber the other terminals since passengers were already familiar with the numbers in place. Free wireless internet access is available in all terminals. Terminal 2 has 9 gates as you can see in Phoenix international airport map (numbered unconsecutively 1-13 and two additional lettered gates C & D) and three parking slots. It was designed by the Phoenix architectural firms of Weaver & Drover and Lescher & Mahoney and opened in 1962. Terminal 3, designed by DWL Architects + Planners, Inc., opened in 1979 and has 17 gates, separated into two concourses by a central building outside of security. Terminal 4, also designed by DWL Architects + Planners, Inc., has more than 90 gates, divided into seven satellite concourses connected behind security.

The Phoenix international airport is the primary regional hub and gateway for Mexican and Hawaiian departures for Tempe-based US Airways and is a focus city for Southwest Airlines. US Airways and Southwest are the airport two largest carriers. The airport current 326-foot (99-meter) tall air traffic control tower began operations on January 14, 2007. The tower stands just east of the Terminal 3 parking garage, and also houses the Phoenix TRACON. This is Sky Harbor fourth control tower and is among the tallest control towers in North America. As of June 2010, Valley Metro route 13 serves the airport terminals. The METRO Light Rail has a stop at the nearby Washington at 44th Street station, and free shuttle service connect the station with the Airport terminals themselves. Routes 1, 3, 13 and 44 serve the light rail station as its shown in Phoenix international airport map. In the future, the Sky Harbor Airport Automated People Mover will take over this function.